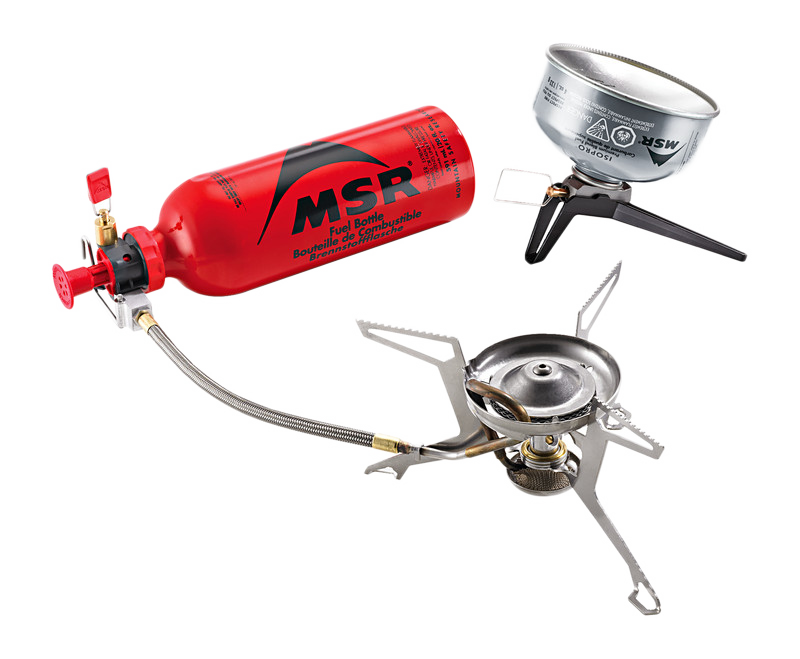 have variations on their basic design.  The Shaker is very popular with backpackers for with its rotating legs it packs well into a small profile.  It uses white gas.  The separate fuel bottle also means weight can be spread about your crew.  The Coleman Exponent Stove is a little bulkier as the gas tank is integrated into the base of the stove, but it has several nice design features.  It has a second regulator valve—making it easier to adjust the flame to a simmer—a built-in windscreen, and it uses white or unleaded gas.  Several manufacturers make butane/propane cartridge stoves too (bottom right illustration).  Butane and propane stoves 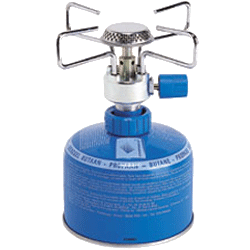 light easily and are dependable, but require packing a second cartridge if the trip is long or the first cartridge is already partially used.  Liquid fuel bottles, on the other hand, can be "topped off" before each trip.  My readings suggest that butane stoves lose some of their effectiveness in cooler, higher altitudes, and they tend to be a heavier option when you consider the weight of the second fuel cartridge.  Still, they are cheap 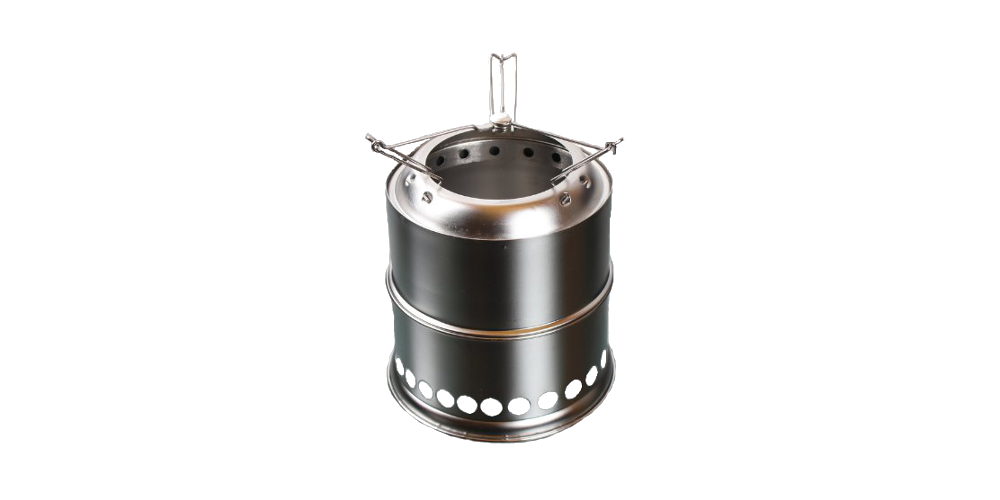 and fuel is available in most hardware or department stores.

In comparing stoves, an important to look are the BTUs the stove produces in contrast to the cook time on a bottle of fuel.  A less efficient model (lower BTUs) may burn longer on a single bottle of fuel but it will require more time to cook the same amount of food than a more efficient stove.  Hence, no real savings.  Note: Don't forget the waterproofed matches or lighter.  None of these models come with a starter!

How Many Do I Need?

Not everyone has to own and pack a stove.  The rule of thumb that works well is that one stove is will be sufficient for up to four people.  The only criteria is to ensure that sufficient fuel is taken for all.  With two stoves in a crew, water can be boiled on one stove for cleaning and sterilization requirements and the food on the second, cutting down cook on time and fuel consumption.  In a normal backpacking crew, one might carry the stove while the bottles of fuel are distributed among the other members.  Sharing this way also allows distribution of weight away from less able backpackers.

How Much Do They Cost?

No need to rush out and buy a stove.  In fact, I would defer your purchase until you determine how serious you are about backpacking and have had first hand experienced with several types stoves so you can better assess your wants and needs.  A few good sources to look at include (but certainly not limited to):

Don't buy on impulse.  Local stores offer fine selections, but prices can vary immensely so be prepared to spend some time doing price comparisons.  Stores often have special prices on last year models, floor models, and returned-for-repair items (look for ones with a guarantee).  Some examples from Fall 2008 catalogs are shown below.

Unless you go to something like titanium (spelled with a "$"), your basic choices are aluminum or stainless steel.  Aluminum is much lighter but doesn't conduct heat as well, nor clean up as easily as stainless steel.  Because food tends to stick to aluminum, non-stick surfaces are a good choice.  One important feature of your cookware is that it must stack within itself to limit bulk.  For one person, a 3/4 quart pot and lid for boiling water, a bowl, and a small plastic or aluminum measuring cup is sufficient.  A small fry pan could be substituted for the bowl.  Quite often, these sets have both a pot and fry pan.  Such combinations can easily be found in either aluminum (with non-stick surfaces) or stainless steel.  There are also some real nice two-person sets that, while heavier and costlier than a one-person set, are lighter and cheaper than two individual sets.

One set I would shy away from is the steel Army issue mess kits that include a two-compartment plate and fold-over-handle skillet.  These are sturdy for sure and ideal for most camping, but are very heavy.  Aluminum versions are a better choice for backpacking, so the traditional Boy Scouts style cook set—stacking bowl, fry pan (with swing-around handle), small pot and lid, will do just fine.  Generic aluminum versions of the same can often be found in most department stores.

For larger backpacking crews (eight to twelve Scouts) "one-pot" cooking is an interesting and economical alternative.  The crew splits up an entire cookware set containing an 8 qt. kettle and lid, 4 qt. kettle and lid, and a 10 inch fry pan, with each Scout carrying his own plate, cup and utensils.

A good recommendation is to carry a 16 oz. stainless steel cup to do double duty as a cup and plate.  For utensils, carry just the minimum.  Select a sturdy table spoon that can triple as a stirrer, ladle, and an efficient food shovel after a long hungry day on the trail.

When hiking alone, all cookware, including stove, can be packed together in a stuff sack and carried in the large compartment of your backpack.  The fuel bottle should be placed in a heavy-duty zip-lock plastic bag and put in one of the outside pockets of the pack to avoid contamination of food or damage to clothing if it leaks.  Sometimes this mess will rattle, but hey, that just lets the bears know to stay out of your way!

Caring for Your Stove

In earlier papers I made mention of the "yummy bag."  This is not a snack bag.  Scouts follow a "leave no trace" outdoor code.  The purpose of the yummy bag is to pack out all food scraps.  You'll need a strainer.  The purpose of the strainer is to separate the scraps from the gray water that goes into the sump (away from water sources and the tenting area).  A Frisbee (as in "flying saucer") with 1/8" holes drilled in it works well.  Another good choice is one of those sand/water strainers small kids use on the beach.  For cleanup the crew will carry biodegradable camp soap (about 1.5fl. oz.), a 2"x2" scouring/sponge combination pad, and hand towel (only about one square foot).  To dry the towel, attach it to the outside of your pack with a safety pin and let it hang dry for a while.  Cleanup should occur in the sump area and, after cleanup, store cookware either in the sump or dining area, away from the tenting area.